Co-Existence Of Oral Cancer And Osmf In Dental Patients: A Retrospective Institutional Study

Introduction: Oral submucous fibrosis has been considered as a premalignant condition or potentially malignant disorder in the literature. It has been now considered an endemic disease in India & South Asian countries where gutka chewing, paan, or areca nut chewing has long been practiced. In recent years, concerns have increased in the new cases of OSMF with malignant transformation.

Material and Method: 609 patients from the Western Uttar Pradesh population (01st March 2018 to 31st December 2019) who were reported to the Department of Oral Pathology/Oral medicine and radiology of our dental college with a clinical diagnosis of OSMF were included in the study. The male/female ratio was approximately 4.5:1. Patients with confirmed histopathological diagnosis of Oral cancer along with OSMF were considered as OSMF with oral cancer.

Result: Out of 609 OSMF patients who were screened for oral cancer, 196 cases were found positive for oral cancer. It means co-existence of oral cancer was found to be in 32.67% of cases, which was significant. All the variables like age, gender, socioeconomic status, and site of lesions were analyzed using the Chi-square test for proportion.

Conclusion: The co-existence of oral cancer in OSMF cases for a Western Uttar Pradesh Population was found to be significantly high. Easy accessibility to dried areca nut in attractive sachet or other forms of tobacco was one of the main causative factors. The need of the hour is to create awareness in the general public regarding the hazardous effect of Gutka chewing/tobacco/other forms especially in the young generation. The concerned authority must take essential steps to create awareness among the journal public about the same.

In 1966, Pindborg defined OSMF as “an insidious chronic disease that affects any part of the oral cavity and sometimes pharynx. Although sometimes associated with and/or preceded by vesicle formation, it is always associated with juxta-epithelial inflammatory response followed by fibroblastic changes in the lamina propria, with epithelial atrophy leading to the oral mucosa stiffness that causes trismus and difficulty in eating.” 1 Initially, it was known as a precancerous condition but later on WHO has changed the nomenclature to a potentially malignant disorder.

Oral cancer is among the main causes of death globally. The prevalence of oral cancer is increasing day by day globally causing morbidity and mortality. The etiology is multifactorial and many etiological factors like genetic, host immunity, viral infection, or use of tobacco may lead to oral cancer 2,3. Among all, the use of tobacco is the leading cause. In recent years there has been an exponential increase in the number of oral cancer and the use of smokeless tobacco is one of the most important contributing factors 4,5. Gutka that is made up of dried areca nut, slaked lime, tobacco, and some flavoring agents has become popular among the young generation and even females since few years. Easy accessibility and availability of this poison under the name of mouth freshener or breath freshener poise a great risk to health that is really alarming. Fresh mixture of Arecanut, Lime, Tobacco (Gutka) in different proportions, or as single/dual or triple mixture by an individual is also common in a certain section of the Indian population.

The use of areca nut alone or in combination with tobacco and flavoring agents not only increases the risk of oral cancer but also leads to the development of oral submucous fibrosis. Burning sensation for spicy food and inability to open the mouth interferes with the normal daily routine of the patient.

Many articles had been published in the past regarding the malignant potential of the OSMF. With this background, a prospective study has been done on OSMF patients who visited the Department of Oral Pathology/Oral Medicine and Radiology, of our dental college in Aligarh; Uttar Pradesh; India.

A cross-sectional survey was conducted among 609 patients who reported to the Department of Oral Pathology/Oral Medicine and Radiology of our Dental College from 01st March 2018 to 31st December 2019 with a clinical diagnosis of OSMF. The ethical clearance was obtained from the Institutional Research Committee; and informed consent was taken from each patient before starting the study. The male/female ratio was approximately 4.5:1.

The study tool was a questionnaire, which had the following parts:

Complete oral examination was done. Clinical diagnosis of OSMF was made based on palpable fibrous bands on buccal mucosa, restricted mouth opening/tongue movement, shrunken uvula, lip thinning, etc. Patients suffering from OSMF and also having non-healing ulcers were advised to undergo a histopathological examination of the ulcer. Patients with a confirmed histopathological diagnosis of oral cancer were given a diagnosis of OSMF with oral cancer. Most oral cancer patients were the cases referred from the Department of Radiotherapy JNMC for dental evaluation prior to radiation therapy for oral cancer.

The entire oral cavity was examined for oral ulcer, red or white patch; or lesions. Patients with confirmed histopathological diagnosis of oral cancer along with OSMF were considered as OSMF with oral cancer, the rest of the patients were kept on follow-up.

Data obtained were tabulated and subjected to statistical analysis. The association of oral cancer was assessed with variables like age, gender, socioeconomic status, and site of a lesion using the Chi-square test for the proportion. For statistical analysis, SPSS v.22.0 was used.

Table 1. Age Distribution of OSMF and OSMF with oral cancer 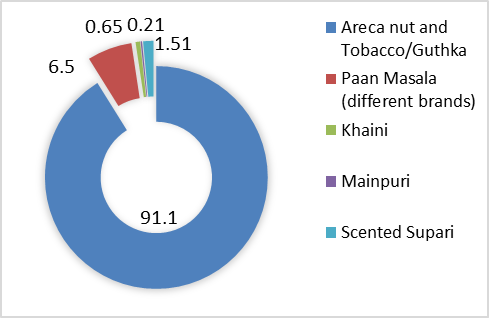 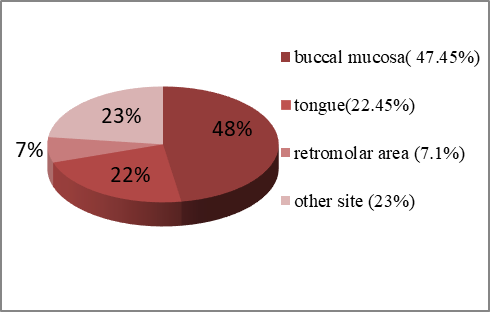 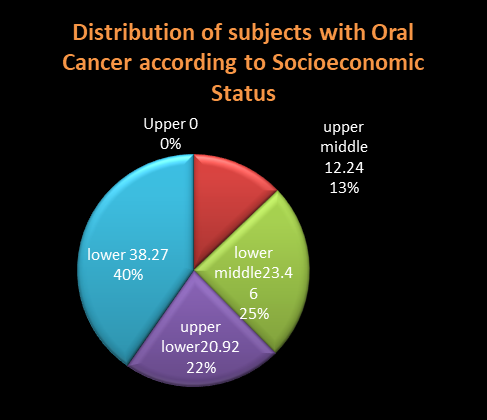 Oral submucous fibrosis is a known debilitating disease that interferes with everyday activity of a person as it causes restricted mouth opening and intolerance to spicy food.  But now, the rising concern is the malignant potential of this condition. Many studies have been conducted by researchers in the past on different populations and they have reported different rates of malignant transformation of this disease in different populations and at different time frames for the same population. A study done by Pingborg et al. on 89 patients in Ernakulam District, Kerala showed oral cancer in 13% of patients with a malignant transformation rate of 4.5% over a period of 4 to 15 yr (median 8 yr) 7. A study conducted by Murti et al on the same population for over 17 years showed a higher malignant transformation rate that is 7.6% as compared to 4.5%. 8

OSMF is characterized by metabolic alteration in collagen synthesis and destruction. The arecoline alkaloids present in areca nut leads to increased production of collagen and the collagen produced are resistant to destruction.

Gutka is a mixture of tobacco, spices, crushed areca nut (also called betel nut), and other ingredients. 9 Government has banned selling and purchase of gutka in India, however, consumption of commercially available areca nut with tobacco and other flavoring agents in different proportions has gained popularity among young Indian population.

Though it is a disease with a multifactorial origin, the development of this disease has shown dose-dependent relation with areca nut and betel quid chewing habit. In our study 91.1% study subjects had habit of chewing areca nut alone or in combination with tobacco. [Figure 1]

OSMF is a potentially malignant disorder and it increases the chance of development of oral cancer. Merchant et al. (2000) 10 in their study concluded that people with oral submucous fibrosis are 19.1 times more likely to develop oral cancer than those without it.

In our study, the incidence of oral cancer concomitant with oral submucous fibrosis was 32.67% which is higher (25.77%) than the incidence reported by Nishant Raj Chourasia et al. 11 It may be attributed to the comparatively  larger sample size of our study.

In our study, the maximum number of OSMF cases are seen in the age group of 21-30 yrs. [Table 1] The finding is consistent with the study done by Jha et al. 12

In our study, only 21% of patients were illiterate and 30% were either graduate or postgraduate. At least, 26% of patients had got education till high school. So, in the presence of formal education showed little effect on the general awareness regarding the health hazard of the areca nut chewing habit. But the low socioeconomic status is found to be related to higher incidence of OSMF with oral cancer. [Figure 3]. This finding of our study supports the findings of the study done by  David I. Conway et al 13 that indicates that risk of oral cancer is significantly higher in patients belonging to low socioeconomic status.

Etiology- Reports regarding the contamination of areca nut with cancer-causing fungus (Aspergillus flavus), adulteration with several hazardous toxic metals, and even pesticides are freely available in the literature. Aflatoxins are fungal toxins produced by A. parasiticus and Aspergillus flavus have carcinogenic and several other adverse effects on human health.

In India, the government regulation for the production and processing of areca nut and other flavoring agents under the name of mithi supari and other commercial products is not very stringent. As a result, the quality of the areca nut cannot be guaranteed.

Our study had a few limitations. As it was an institutional unicentric study, the outcomes cannot be generalized for the entire population. For more reliable outcomes, and generalization of the study findings, multicentre studies having a larger sample size need to be carried out. It was a cross-sectional study, so we can only assess the association of the presence of oral cancer in OSMF patients but cannot confirm that oral cancer developed secondary to OSMF.

OSMF is strongly associated with an increased risk of oral cancer, although the biology underlying this association has not yet been resolved. Chances of development of oral cancer in OSMF patients further increases due to the synergistic effect of other factors like genetic susceptibility, nutritional deficiency, and chronic trauma. The recent increased use of areca nut in combination with tobacco and other products has raised the number of new cases of oral cancer in patients suffering from OSMF and thus, the burden of oral cancer. The need of the hour is to increase the public awareness regarding the health hazard associated with chewing of areca nut or betel quid and stringent regulation by the government to the production of tobacco products.