Patients refer to dentists due to different problems.1 There are teeth abnormalities with different types and severities 2-4 such as extra or missing teeth, and Taurodontism.5 The congenitally missing teeth “(teeth agenesis)” are one of the abnormalities that can be occurred in one or both of the jaws which are referred to as an absence of a single tooth or multiple teeth and it may be unilateral or bilateral tooth/ or teeth missing. In general, the congenitally missing teeth interfere negatively on the dental esthetic, occlusion and the masticatory function in the individuals with this abnormality.

Studies on this abnormality were distributed around the continents of the world. The studies in Europe, America, and Australia found 5.5% in Europe, 6.3% in Australia and lower rates were in North America.26 These anomalies are rarely associated with deciduous teeth, but their occurrence is common between the permanent teeth, some studies stated that there was a relationship between the congenitally missing teeth in both deciduous and permanent teeth. The reports stated that the occurrence of congenitally missing teeth in children was due to the loss of the corresponding successor's primary teeth.27, 28 Many studies stated that the congenitally missing teeth can be associated with some oral or other abnormalities, “microdontia” considered the most widely feature associated with cases of teeth agenesis.29

Also, other abnormalities may be associated with these cases, like cleft lip and palate, and Down ‘syndrome.6, 27, 30 The ectopic position of permanent, Peg shaped maxillary lateral incisors, enamel hypoplasia, palatal inclined or impacted maxillary canines and molar infra-occlusion.31-33 Rotations and generalized spacing of the teeth beside missing mandibular second premolars can be seen.32 As well as, over-erupted and reclined mandibular incisors which cause increase overbite can be seen.34

During the early phases of tooth development, any disturbances in the early phases of this period lead to congenitally missing teeth.35 Genetics plays a major and critical role in the development of these anomalies.36 Several studies confirmed the genetic effect of researches on monozygotic twins.18, 37-39 It is reported that the absence of anterior teeth may depend mainly on genes, but the absence of posterior teeth might be controversial.40 Environmental factors have a role in the etiology of these anomalies or combination with genetic factors.

Many studies reported that the “ectoderm” undergoes “dysplastic expression” due to these factors.18, 40-42 Due to the environmental factors, the tooth germ is developing after closing the space available for the development of teeth b the surrounding tissues.20, 43 When the primary teeth are missing congenitally, their permanent analogs may also be missing.18, 44

The understood of the exact genetic mechanism responsible for the development of congenital teeth missing is still vague.20, 42, 51, 60 So independent mechanisms might recommend for each missing tooth.20 Nowadays, mutations in specific genes as LRP6 gene “gene encoding low-density lipoprotein receptor-related protein” has been reported for the etiology of the tooth absence.61

The study was undertaken on 395 patients (189 Males and 206 Females) aged ranged between 13 to 25 years who referred to some dentistry centers in Baghdad for taking “orthopantomogram” (O.P.Gs) for the period from December 2018 to November 2019.

All patients with O.P.Gs were examined clinically on the dental chair for diagnosis of the missing teeth and taking the history to confirm the congenital absence of teeth. The radiographs were viewed by an X-ray viewer.

All patients were informed of the purpose of the study with signed consents.

All data were analyzed using the Statistical Package for the Social Sciences software (version 19). The relation between the prevalence of CMT and gender, upper and lower jaws were analyzed using Pearson’s chi-squared test. The significance level was set at 0.05 and considered significant if the P-value  < 0.05.

A congenitally missing tooth or tooth agenesis is considered to be one of the most anomalies in jaws compared to other dental anomalies that are distributed widely among the people of the world.

Many authors indicated that several factors could have a role in the incidence of dental anomalies, these factors varied as hereditary, environmental, the pattern of nutrition, chewing function and systemic problems.62-67

It was reported that the “teeth agenesis” occurred with the permanent teeth about two to nine times more than the deciduous teeth.18, 58

Other studies reported that environmental and genetic circumstances have an important role in the occurrence of the congenitally missing teeth. 41, 75

Many studies have agreed that maxillary lateral incisors are the most congenitally missing teeth followed by the mandibular second premolars.18, 60, 76-79

In many people also it has been reported that the most frequent congenitally missing teeth were the maxillary lateral incisors and then mandibular and maxillary second premolars respectively (except third molars).18, 60, 76, 77

In Europe, it was reported that the most common congenitally missing teeth are the mandibular second premolar following the third molar, and then the maxillary lateral incisor and maxillary second premolar.87

The study also found that congenitally missing teeth were more prevalent in females compared with males, this agreed with several studies.17, 18, 26, 80, 84, 88-91 Many studies had confirmed that the difference is not significant, but other studies have been stated that there was a high prevalence increase in females in comparison to males.14, 19, 20

But on the other hand, some authors in the Kenyan population reported that the most prevalent of congenitally missing teeth were in males rather than females.21

Also, the study found that the prevalence of congenitally missing teeth was more in the maxilla than the mandible but this difference was no significant. These findings are similar to many studies.15-17, 84, 92-94 But on the other hand, other studies stated that the majority of these absences were in the mandibular jaw.95-97

The study also showed that the prevalence of congenitally missing teeth on the left side of the jaws is more in comparison to the right side but this difference was not significant.

The study showed that the congenital absence teeth on the left side of the jaws were more prevalent compared with the right side but this difference was not significant. This agreed with the study of some authors and they found that the prevalence of congenitally missing teeth was more predominant (55%) on the left side in comparison to the right side of jaws which was 45%.98

Overall, The current study found that the rate of congenitally missing teeth in the sample of the Iraqi population was 10.37%. The size of the study sample, genetic, and the local region where the study was conducted might affect the results.

My gratitude is to all dentistry centers where the study was done.

There was no conflicts of interest.

Table 1. Distribution of CMT in the maxilla and mandible.

Table 2. showed the frequency of CMT in males and females

Table 3. showed the frequency of CMT in maxilla and mandible

Table 4. showed the frequency of unilateral and bilateral CMT in the jaws

Table 5. showed the frequency of CMT in the left and right side of the jaws. 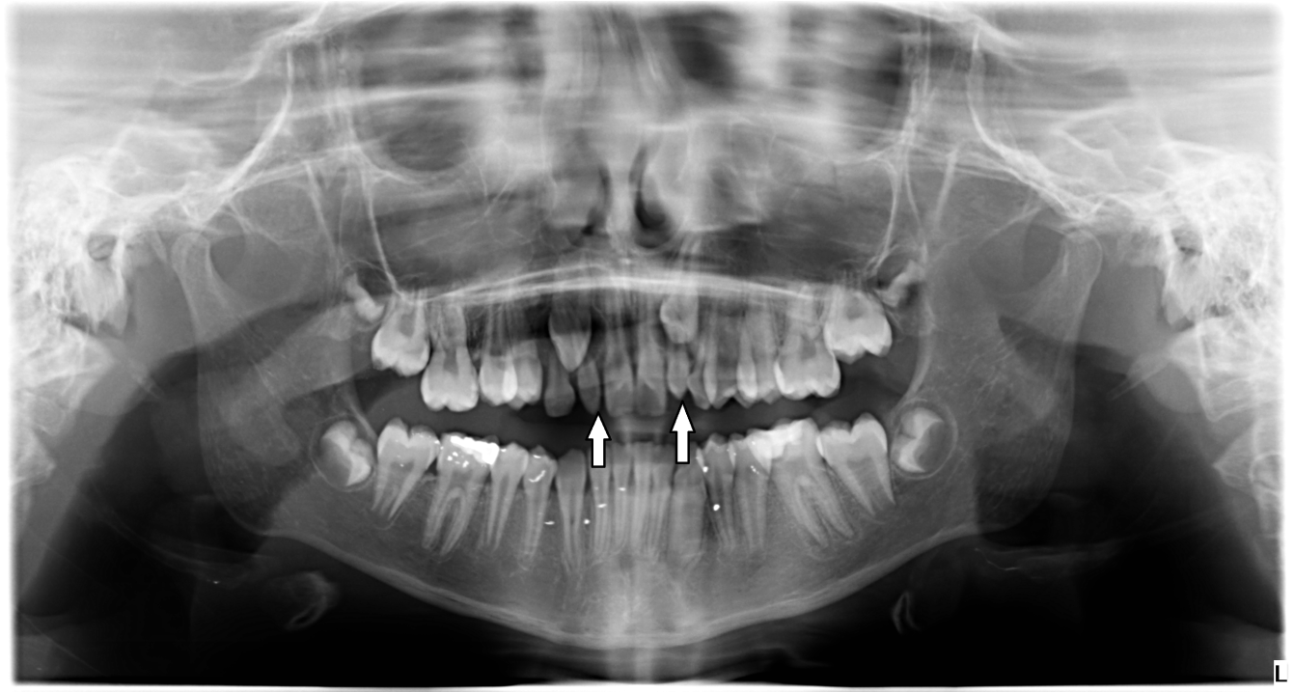 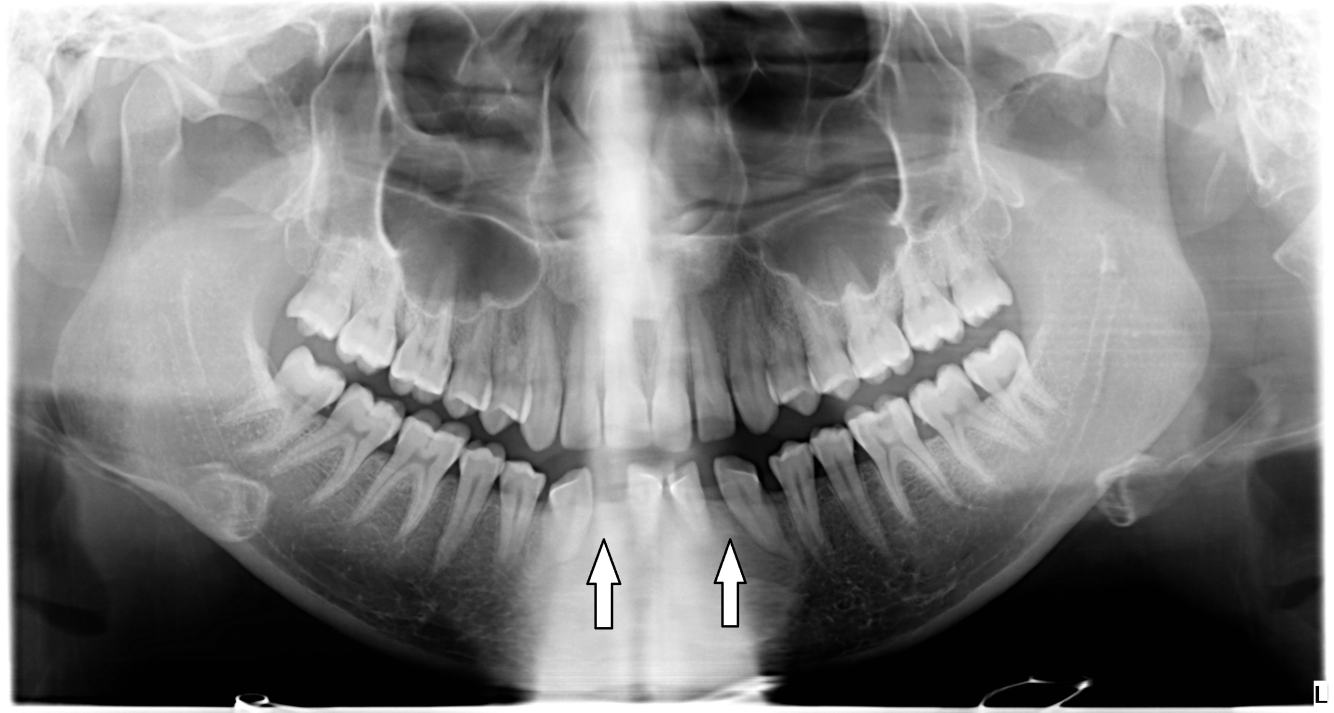