Evaluation Of Psychological Factors In Patients With Oral Lichen Panus

Lichen planus is considered as a chronic inflammatory mucocutaneous disease of unknown etiology which usually affects the skin and/or oral mucosa and occurs in about 0.02-4% of the adult population.1-3 The oral lichen planus (OLP) usually have a separate clinical morphology and typical distribution. No clarity of etiology is known, but it is thought to be involving various genetic, infectious, psychogenic, and autoimmune factors. Current data suggest that OLP is a T cell-mediated autoimmune disease in which auto-cytotoxic CD8+ T cells trigger apoptosis of oral epithelial cells. 4

The prevalence of OLP among the general population fairly support that this disease of adult-onset, with an inclination for female predominance and of worldwide distribution. 5 Various authors in their widespread review state that “Lichen planus affects both sexes, although occasional surveys have suggested a male predominance, while in the majority have revealed that some 60 to 65 % of patients are females”. 6

The initial description by Erasmus Wilson in 1869 shows the association of psychological factors especially depression, anxiety, and stress with oral lichen planus. 7 Some studies observed that patients with OLP demonstrate higher levels of anxiety, greater depression, and increased susceptibility to psychic disorders. 8 The contagious nature of this disease with the lack of available patient educational materials leads to stress and patients' concern about the possibility of malignancy. 4

Since 50 years ago, health measurements have become very impressed with the application of numerical scaling techniques to various health indices which can translate subjective statements about pain or anxiety into a numerical value that could be used for statistical analysis. Psychiatric rating scales such as Hamilton scales for Anxiety and Depression and the Brief Psychiatric Rating Scale were created to serve this purpose and express the undisrupted value of medications used in the treatment of mental disorders in comparison to Placebo. 9 There are two types of treatment for depression; 1) psychotherapy and 2) medications.10 According to the monoamine hypothesis of depression, inadequate activity of monoamine neurotransmitters plays important role in depression.11 Since then various scales were developed to help out in making the psychiatric diagnosis, to assess side effects of medications, and to evaluate other areas of functioning such as physical capabilities, disabilities, or quality of Life. 9 Health promoting behavior is a major criterion for determining health. 12 Accordingly, the World Health Organization (WHO) has defined health as the presence of complete physical, psychological, social and spiritual well-being, and not just the absence of a disease or deficiency of an organ. 13

The sample size was determined based on the pilot study performed. A sample of 30 was determined as the minimum in each group to estimate and to calculate for the statistical analysis. Therefore, the study sample included a total of 60 subjects who were divided into the following groupings.

A study group of 30 subjects, clinically and histopathologically diagnosed cases of oral lichen planus with inclusion criteria of patients who were physically healthy and well oriented in time and space having symptoms of pain and/or burning sensation secondary to oral lichen planus and also agreed for the biopsy and hematological examination.

A control group (n = 30) of age and sex-matched healthy subjects, who had no recent history of systemic conditions mentioned in the exclusion criteria nor any oral lesion.

Exclusion criteria for both groups include the patients suffering from any systemic disease like cardiovascular system disease, renal dysfunction, diabetes, hypertension, liver disorders, etc with a history of drug therapy which may cause lichen planus like lesions. Patients having any other mucosal disease or skin disease associated with oral lesions and any physical or mental abnormality, which would interfere or affect the study procedure is also excluded from this study.

All the participants have explained the need and design of the study and the need for undergoing a thorough clinical examination, biopsy, and blood investigations at the start of the study. Only those patients, who gave a signed informed consent on an institutionally approved document, participated in the study.

The oral examination of the patients was performed by asking patients to comfortably sit in a dental chair equipped with white artificial light and by using mouth mirrors. The criteria based on clinical examination described by WHO were adopted in making the provisional diagnosis of Oral Lichen Planus. 14 The Lesions of the oral cavity were recorded based on WHO standard recording form for oral mucosal diseases. 14 A detailed case history was recorded. Informed patient consent was obtained for this study.

This Psychological evaluation was done with Depression, Anxiety, and Stress Scale (DASS). This scale consists of 14 questions each of depression, anxiety and stress comprise a self-assessment questionnaire of a total of 42 questions. The questionnaire was also translated into the regional language of ‘Hindi’ as patient-friendly. Patients were asked to relax for 30mins and to sit comfortably on the dental chair. Subjects were explained about the procedure and were asked to answer the questions without any preoccupied mind. These subjects were asked to grade the questions from 0 to 3, where 0 indicated did not apply to me at all, 1 indicated applied to me to some degree, 2 indicated applied to me to a considerable, and 3 indicated applied to me most of the time. The total score and percentage were calculated with these scores and finally tabulated. Following range was used to grade the psychological parameters:

Results are presented as Mean ± SD for quantitative/ continuous data, and number and percentages for categorical data. Student’s t-test was used for comparing the means of the groups

The present study comprised of 30 OLP patients and 30 age and sex-matched healthy controls was selected as per mentioned in the methodology. A master chart was prepared, which included the entire information obtained and recorded from subjects and was subjected to statistical analysis.

Psychological evaluation of individual components of depression, anxiety, and stress was scored separately based on the DASS scale for both the study group and the control group.

In our study among the study group, we found normal levels of depression in 9 (30.0%) patients and elevated levels among 21(70.0%) patients. Mild levels were observed in 7(23.3%) patients, moderate in 6 (20.0%), severe in 4(13.3%) and extremely severe in 4(13.3%) of patients. All the healthy controls had no depression. Hence, we found statistically significant increased levels of depression in patients with OLP with a Mean ± SD range of 83.4± 13.1in comparison to 69.9 ± 4.9 of healthy controls. There was no age discrimination for depression in our study as it is supposed to increase with age. The value of the test of significance “t” value was 5.21 and the p-value was <0.001 indicating highly significant. (Figure 2)

In the study group, we found normal levels of stress only in 1 patient (3.3%) patients and elevated levels among 29 patients (96.6%).In the current study, we found 6 patients (20.0%) patients under a mild level of stress, 4 patients (13.3%) with moderate level, 13 patients (43.3%) with severe level and 6 patients (20.0%) was observed in the extremely severe level of stress. Among the control group, all the subjects were not under stress.  In our study we found statistically significant increased levels of stress with a Mean ± SD range of 92.8±7.3 in patients with OLP, when compared to 70.1±4.9 of healthy controls with a t value of  14.0 and the p= <0.001 indicating highly significant. (Figure 4)

OLP is a fairly common disease of adulthood with a prevalence of  0.02 to 0.22%, as per recorded in 30,000 dental outpatients among Indians.5 Etiopathogenesis of OLP appears to be complex usually depends on genetic, environmental, and lifestyle factors where stress has been extensively well-thought-out to be an important etiological factor of OLP.

In psychiatry, various scales used where different categories reflecting an increased order are measured in terms of numbers like 0=Normal, 1=Slight, 2=Mild, 3=Moderate, 4=Severe. Each scale has its guideline on how to use, the rating system which generally evaluates the patient's behavior over a defined time. 9

Various previous studies show that scales used in psychological assessment of patients i were either self-reported or assessed by a psychiatrist. 7, 8, 15-19 In the current study we used a self-reported scale called DASS, which can assess all the three psychological parameters i.e. depression, anxiety, and stress because this scale is best suitable for patients as it was easily replied by a patient without a preoccupied mind which results in unbiased results.

In our study, we found the majority of patients in the age range of 31-40 years. This fact is supported by various studies where OLP had been predominantly considered as a disease of middle age and elderly with ages ranging from 30-70years with numerous cases that have been reported in children as well as elderly patients. 2, 4, 6, 20-24 The sex distribution of OLP inclines females. In a comprehensive review, authors have stated that OLP affects both the sexes whereas the enormous majority of surveys have revealed female predilection with 60-65%, and with a mean of 62.6% of patients.25 The ratio of female to male was 2.2:1, which was reported in a follow-up study of 326 patients. 25  Similar sex predilection with a ratio of female: male, i.e. 2:1 was reported in a study of 48 patients. 19 In our study, slight female predilection was noted with 60.0% compared to males (40.0%) and with the ratio of 1.5:1 between females and males

In a modern view of the etiology and pathogenesis of many diseases is depending on multiple factors. Engel in 1977 described the bio-psycho-social model of illness, which suggests that any illness is caused due to the interaction of three factors: the biological, the psychological, and the social. He also observed that stress and anxiety are the combined results of psychological and environmental social factors which result in a potential effect on oral health, including OLP. 26, 27 Some authors also included OLP as one of the psychosomatic diseases. 28

In another cross-sectional study, the authors used the profile of mood states (POMS) to assess the psychological status and inter-relationship among the psychological, endocrine, and cellular immune systems in patients suffering from OLP lesions. They found a positive association of mood state with the onset of OLP. 30  Hence the result of this study was agreeable with that of our study.

In the present study, we found statistically raised levels of stress in patients with OLP in comparison to healthy controls.  In clinical evaluation of 115 patients with OLP, reported that 49% of OLP patients were subjected to strong stress in their lives. 22  In a follow-up study of 326 patients with OLP, the authors found psychiatric stress associated with the onset of disease in only 14.4-22.3% of cases. 25 The results of these studies are similar to that of our study. VAS, where the degree of discomfort expressed by patients was replaced by stress, was used for assessment of stress in 10 patients with erosive OLP along with 10 controls. The authors found a significant difference in stress scores among study and control groups. 31  The results obtained from this study were similar to those obtained by our study.

Test of Recent Experience (TRE) or Florenzano’s test was used to measure the degree of stress in 9 OLP patients and 20 healthy controls. They found a statistically significant difference in levels for stress in OLP patients, when compared with healthy controls. 8 These results too supported in our study. Thus overall we found all psychological factors i.e depression, anxiety, and stress were increased in patients with OLP with a slight female predilection.

The method of measuring health indices with the application of numerical scaling techniques had become been very impressive for the last 50 years. This provided the capability to interpret subjective factors about pain or anxiety into a numerical value that could be used for statistical analysis. Our study involved a small sample size and the results of our study need to be confirmed in larger longitudinal population studies with an improved protocol to prove that psychological state assessment in OLP patients which could influence better treatment compliance. It will significantly contribute to the management of OLP patients by achieving specific goals. 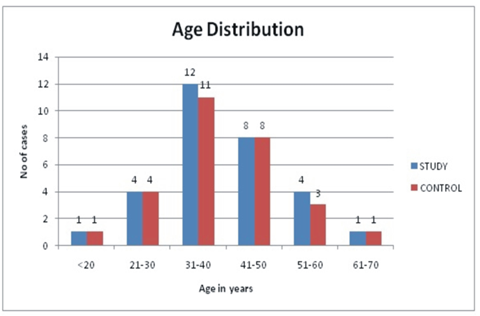 Figure 1: Comparison of age distribution between study and control group 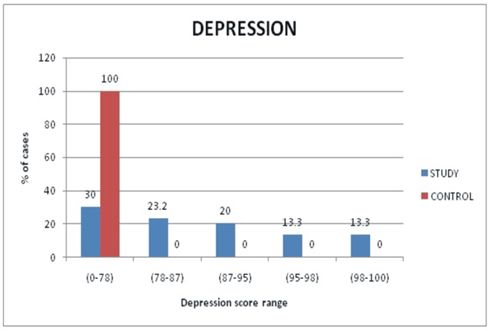 Figure 2: Comparison of depression score between study and control group 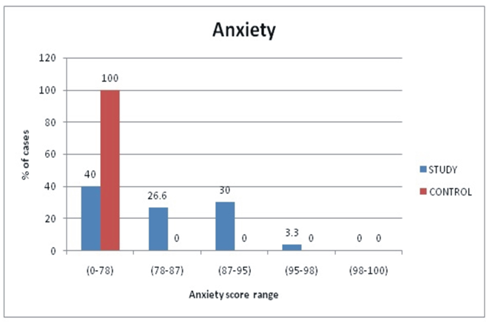 Figure 3: Comparison of anxiety score between study and control group 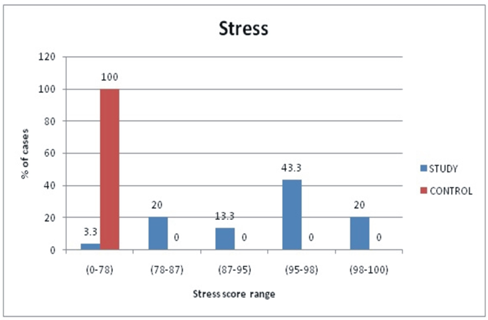 Figure 4: Comparison of stress score between study and control group