Using a chemo-mechanical preparation to clean the root canal system 1 followed by achieving a 3D seal with inert material is the main goal of root canal treatment 2. The complexity of the root canal morphology is one of the major challenges that the clinicians face and a thorough knowledge of the pulp space anatomical complexities is essential for achieving an effective root canal treatment 3, 4. The maxillary first molar is the poorly understood posterior tooth with a very complex root canal anatomy which may have implications for the longstanding prognosis. A major cause of endodontic failure of maxillary 1st molar is the incapability to locate, debride, and fill the commonly present 2nd mesiobuccal canal (MB2)5. This canal is recognized as the mesiolingual canal of the mesiobuccal root, mesiopalatal canal, or MB2 which is very often existing in the lingual portion of the mesiobuccal root. The existence of the MB2 canal in maxillary first molars is supposed to range from 50% to 90% of cases6, 7.

The need for the conservation of tooth structure has become popular in dentistry, especially in the preventive and restorative part of dental treatment for many years 8. One of the main objectives of tooth restoration is the protection of exposed dentin against bacteria and their toxins 9. A dental implant acts as the common dental procedure that is usually undertaken during the cases of jaw or mouth injuries 10. The procedure conventionally utilized to locate root canals has depended on the dentist's tactile dexterity, skills, and the mental image of the canal system 11. Loupes and microscopes are magnifying devices that have also been utilized in dental practice letting better visualization of canal orifices12, 13. Besides, the use of a microscope increases the illumination of the pulp floor, contributing to the identification of extra canals, therefore, enhances the probability of a successful outcome13. Recently, ophthalmic dyes have been used in dentistry in diagnosis, in locating pulp chamber and root canal orifices, as well to measure the relative sealing efficiency of the root canal sealers14. This in-vitro study aimed to compare the diagnostic efficiency of four approaches in detecting the canal orifices of maxillary 1st molar.

Sound, intact, three-rooted, freshly extracted human 50 maxillary first molars were collected and maintained in formalin for the research. Molars with previous endodontic treatment, fused roots, single roots, or with more than three roots were excluded from the investigation. The teeth were washed thoroughly under running tap water to eliminate blood, saliva, etc. The root surfaces were debrided with a hand scaler. The teeth were washed thoroughly in tap water and stored in distilled water at room temperature to prevent dehydration. The teeth were embedded in 5 cm × 5 cm cylinder of modeling wax.

With the naked eye, an access cavity was set utilizing an endoaccess bur. The first penetration was made in the exact center of the mesial pit, with the bur directed toward the palatal direction by utilizing a high-speed handpiece to the depth of dentin.

According to the size of the chamber, an endoaccess bur or No. 4 round diamond bur was used to get access into the pulp chamber. The bur was directed to the orifice of the palatal canal. When a drop was felt, the pulp chamber was got. The larger palatal canal was situated first. Then, bur was modified to safe ended endo-Z fissure bur. Maintaining the bur in contact with the floor of the pulp chamber moved mesiobuccally to the center of the mesiobuccal cusp. The mesiobuccal canal placed underneath the cusp tip. Then, the bur was relocated distally and slightly palatally to locate the distobuccal canal orifice.

Conventional triangular access was modified to a trapezoidal shape to enhance access to the additional canals. Last finishing and funneling of cavity walls were performed with endo-Z fissure bur.

After a satisfactory cavity was produced, the content of the pulp chamber was eliminated by an endodontic excavator, and irrigation with a 2.5% sodium hypochlorite solution was carried out. The pulp chamber floor was explored utilizing an endodontic explorer (DG-16). Dentin overhangs were detached with swan-necked LN bur groove (Maillefer) to open subpulpal groove to localize the extra canal orifices.

Exploration of the groove connecting the canal orifice was carried out with the utilization of K-file #6, #8 or #10 (Dentsply Maillefer, Ballaigues, Switzerland). The existence of each orifice was noted when a K-file #8 or #10 pushed into the orifice to stand by itself. Therefore, in our investigation, we have utilized the word 'canal orifice' for a true canal.

Group-I: After the end of the procedure, the number of canal orifices in each root was detected by the naked eye and recorded (Figure 1).

Group-II: All the teeth were again observed under a surgical loupe (2.5-3.0 X) (Neitz BLS-3, Japan). If dentin overhang over the orifice was present, then this was removed with LN bur to find out another canal orifice and the number of canal orifices in each root was recorded.

Group-III: All the teeth were observed through a surgical operating microscope with 2.6X to 15.5X magnification (OPMI PROergo, Carl Zeiss, Germany). The microscope was utilized with 200 mm distance from the tooth in the direct vision, and the teeth were then revisualized for recording the number of canal orifices in each root (Figure 2).

Under tooth clearing method, the actual number of root canal orifices was detected as follows:

India ink was injected into the pulp chamber of the extracted tooth and aspirated from the apical foramen. The teeth were placed in 5% solution of nitric acid and were left in the solution for 72 hours, with intermittent changing of the acid solution after every 24 hours. The teeth were then rinsed in tap water again and were placed in 80% solution of ethyl alcohol for 12 hours, followed by 24 hours in 90% ethyl alcohol solution, and finally placed in 100% absolute ethyl alcohol solution for an additional 24 hours to dehydrate the specimens. By treating them with methyl salicylate solution overnight, the teeth were then cleared. The actual number of canal orifice in each tooth was examined by noting the transparent tooth on the display of the CCD camera.

Number of canal Orifices were recorded by

The number of mesiobuccal canal orifice (MB1), distobuccal canal orifice (DB1), and palatal canal orifice (P1) were determined and negotiated by different devices (Table 1). In the case of fluorescein sodium, the in vitro study did not reveal any satisfactory result as the fluorescence is only emitted when the dye is absorbed by connective tissue element of pulp in the chamber and root canal system which is not probable in extracted teeth.

The maximum detection rate for mesiobuccal orifice was seen for Surgical Operating Microscope followed by surgical loupe and the naked eye. For distobuccal and palatal orifices, all 3 methods had the same detection rate (Table 3, Graph 1). 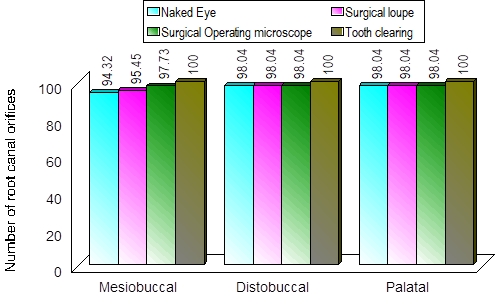 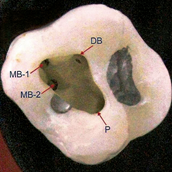 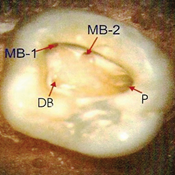 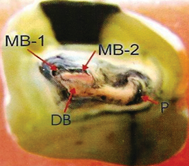 The success of endodontic therapy demands satisfactory cleaning, shaping, and filling of the entire root canal system15. It is important for the success of root canal treatment that the entire root canal system is accurately cleaned and no canal be missed. It has been stated that failure to locate root canals is one of the key reasons for endodontic failures16. In that matter, the occurrence of the MB-2 canal in the mesiobuccal root of the first maxillary molar is always a subject of concern to the endodontic society.

The ML canal or MB2 canal in mesiobuccal roots of maxillary first molars has been considered to be very challenging to locate clinically17. Kulild and Peters assessed the internal anatomy of maxillary first molars utilizing the sectioning procedure. Their results revealed an occurrence of 94.1% MB2 canals in these teeth18. Smadi and Khraisat 19 found a presence of 63.9% of two root canals in the MB root of molars (MB2). Degerness and Bowles 20 reported the frequency of accessory canals in MB roots of maxillary molars as high as 80%.

The purpose of this in-vitro study was to find out the actual number of root canal orifices that would not have been possible to locate in an in-vivo study. It is often seen that many times an extra root canal orifice is there but it is not negotiable clinically. For this purpose, the clearing method utilized in this study provided a 3D view of the root canal system.

In the present study, fluorescein sodium dye did not reveal any satisfactory result because the fluorescence is only emitted when the dye is absorbed by connective tissue elements of the pulp in the chamber and root canal system which is not probable in extracted teeth. Therefore, it should be used in in-vivo studies on patients only to facilitate the detection of extra root canal orifices.

In this investigation, not statistically significant but higher detection rate of root canal orifices was found under the microscope than detected by naked eyes or surgical loupe. This finding was in line with the studies conducted by Yoshioka et al. 21, where the detection rate was 82.79 % by the naked eye, 85.79% by surgical loupes, and 93.17% by an operating microscope. Another study revealed a high incidence of an ML canal in the mesiobuccal roots of the first maxillary molars (90.7%) and indicated that the adjunctive utilization of the SOM increased the capability of the clinician to locate the ML canal orifice. Similar findings were also observed in the other investigations where the use of a surgical microscope improved the ability to detect MB-2 canal 22-24.

In this study, MB-2 canal orifices were found in 66% without magnification and in 72% with magnification in maxillary first molars with a surgical operating microscope. This finding was in line with some studies 22, 25, 26 but was different from other studies 27, 28. This difference in percentage could be because of racial divergence which could have played an important role 29.

The detection rate of MB2 canal orifice in the maxillary first molar was superior utilizing a surgical operating microscope compared to surgical loupe and the naked eyes, revealed that the adjunctive utilization of the SOM increases the ability to detect an MB2 canal orifice. When these canals are treated, the success rate of the endodontic treatment would increase.

The authors declare that there is no conflict of interest.